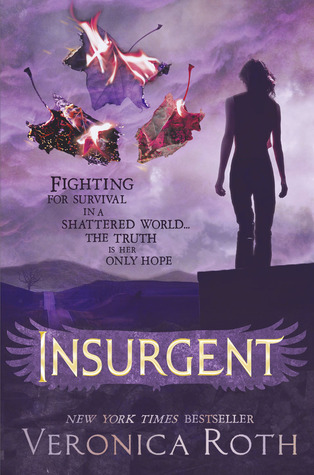 Source: From the publisher via Netgalley. This is my honest review.

I HAVE DONE BAD THINGS.
I CAN’T TAKE THEM BACK,
AND THEY ARE PART OF WHO I AM.

Tris has survived a brutal attack on her former home and family. But she has paid a terrible price. Wracked by grief and guilt, she becomes ever more reckless as she struggles to accept her new future.

Yet if Tris wants to uncover the truth about her world, she must be stronger than ever… because more shocking choices and sacrifices lie ahead.

I can honestly say that Insurgent is just as full to the brim of action as Divergent is. There wasn’t much easing in to the story – not even a ready, steady, action! Page one picks up right where Divergent left off (quite literally action-wise), which I think is a good thing because Insurgent is that sort of book that you can do that.

There aren’t many differences that I can pick out when it comes to reviewing Insurgent from Divergent. Except in the plot. Insurgent’s plot is all about Tris’s battle with the Erudite and traitor Dauntless, whereas Divergent is about Tris becoming Dauntless. In terms of that, I think I prefer Divergent’s plot over Insurgent’s but that’s just more of a personal preference because I just prefer that sort of thing. Most people I have talked to are the other way around and I can see why. It’s just a matter of where your tastes book-wise lie.

The amount of twists were awesome. I’d say they go into full swing mode in about the second half. You could be happily cruising along, reading the story, when they hit you out of nowhere. I love books with loads of twists, they keep you hooked and interested and can sometimes induce emotions such as weeping, shouting with excitement, pulling at the hair and happy crying. That being said, I kind of guessed the ending. I guess I kind of did and I kind of didn’t. I knew something like that was going to happen and with that person. If you read Insurgent, trust me, you will know what I mean.

I love the cover! It’s not often that you see colours like that together on a cover. The Amity symbol is really unique as well, so for me the cover really works.

Veronica Roth is from a Chicago suburb. She studied creative writing at Northwestern University, and wrote DIVERGENT (Katherine Tegen Books, May 2011) and INSURGENT (May 2012). The third and final book in The Divergent Trilogy, ALLEGIANT, will come out on October 22, 2013. In the meantime she will spend endless hours browsing Wikipedia in her pajamas as she eats corn flakes. (Or some other kind of bland breakfast cereal.)

2 thoughts on “Insurgent by Veronica Roth”